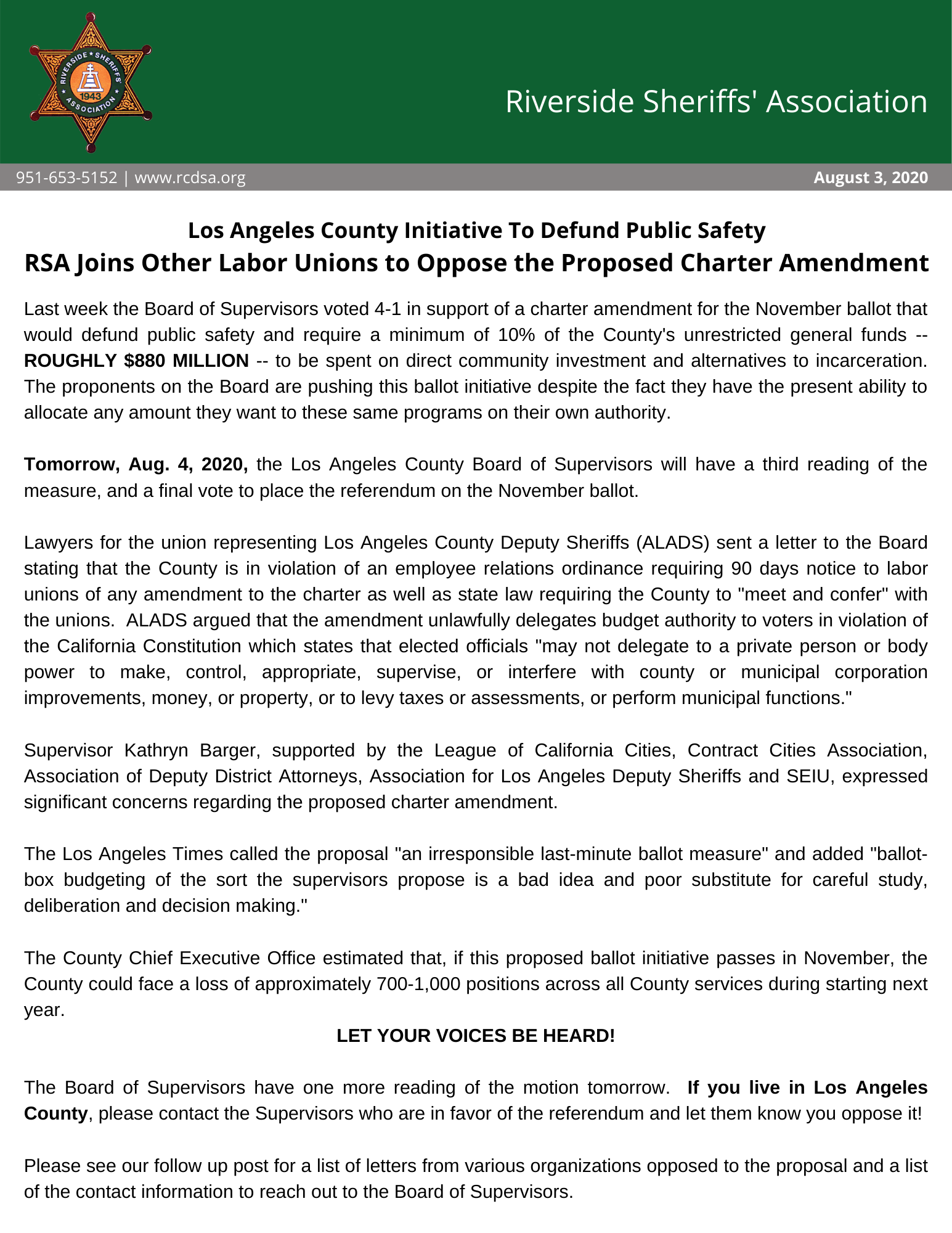 Last week the Board of Supervisors voted 4-1 in support of a charter amendment for the November ballot that would defund public safety and require a minimum of 10% of the County's unrestricted general funds -- ROUGHLY $880 MILLION -- to be spent on direct community investment and alternatives to incarceration. The proponents on the Board are pushing this ballot initiative despite the fact they have the present ability to allocate any amount they want to these same programs on their own authority.

Tomorrow, Aug. 4, 2020, the Los Angeles County Board of Supervisors will have a third reading of the measure, and a final vote to place the referendum on the November ballot.

Lawyers for the union representing Los Angeles County Deputy Sheriffs (ALADS) sent a letter to the Board stating that the County is in violation of an employee relations ordinance requiring 90 days notice to labor unions of any amendment to the charter as well as state law requiring the County to "meet and confer" with the unions.  ALADS argued that the amendment unlawfully delegates budget authority to voters in violation of the California Constitution which states that elected officials "may not delegate to a private person or body power to make, control, appropriate, supervise, or interfere with county or municipal corporation improvements, money, or property, or to levy taxes or assessments, or perform municipal functions."

The Los Angeles Times called the proposal "an irresponsible last-minute ballot measure" and added "ballot-box budgeting of the sort the supervisors propose is a bad idea and poor substitute for careful study, deliberation and decision making."

The County Chief Executive Office estimated that, if this proposed ballot initiative passes in November, the County could face a loss of approximately 700-1,000 positions across all County services during starting next year.

Several groups are prepared to launch legal action on the grounds of procedural and legal issues with the charter amendment.  To read our letter and letters from various organizations opposed to the proposal that will jeopardize public safety, please click the hyperlinks below.

LET YOUR VOICES BE HEARD!

The Board of Supervisors have one more reading of the motion tomorrow.  If you live in Los Angeles County, please contact the Supervisors who are in favor of the referendum and let them know you oppose it!

Tweet
NO ON SB 731
Response to Call for Riverside County Police Revie...